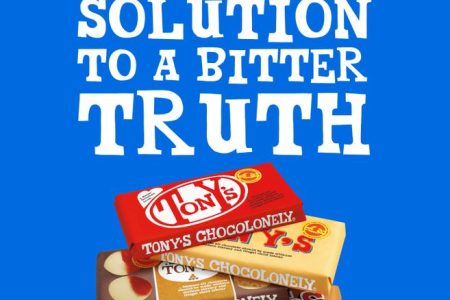 Tony’s Chocolonely have announced the release of its limited edition Sweet Solution bars, which sold out only hours after its launch today, reports Kiran Grewal.

The message behind the launch was to expose “the bitter truth” in our chocolate industry, where Tony’s continues its mission to ensure 100% slave-free chocolate is the norm. However, the Dutch confectionery company says “things aren’t being shared evenly in the chocolate supply chain. The chain starts with millions of farmers who produce cocoa and ends with the billions of consumers who enjoy chocolate. But what about the bit in the middle? This section is dominated by a handful of chocolate giants that profit from keeping the price of cocoa as low as possible. As a result, farmers are forced to live in poverty. And that leads to illegal child labour and modern slavery,” they report on their website.

In a bid to expose “Big Choco” companies who they claim have no real protocol to stop child labour and modern slavery when producing their products, Tony’s has released a limited edition range of chocolate bars, and released a petition to create change.

“Introducing our limited edition #SweetSolution bars. They may look a lot like.. but they’re made very differently; using Tony’s 5 Sourcing Principles to tackle the bitter truth of modern slavery and illegal child labor. Together we’ll make ALL chocolate 100% slave free. ​

“In 2001, the world’s eight biggest chocolate companies promised to eliminate the worst forms of child labour and modern slavery from their supply chains. They did this by voluntarily signing the Harkin-Engel protocol. Nice, right? Only..

“The Harkin-Engel protocol was made up to stop the development of a compulsory “no child slavery” label for chocolate. Almost no Big Choco could make that claim, and seriously, would you buy their bars if you knew the bitter truth?

“What’s more, Harkin-Engel is a non-binding protocol, so not living up to it has zero consequences. Even if you signed it again and again and again in 2005, 2008, 2010.. and upped your promise to eliminating ALL forms of child labor and modern slavery.

“Surprise, surprise, not a single target has been met. This has been going on for nearly 20 years. Time’s up. Time to act now! Time for all of us to be part of the solution. Time to sign the petition,” Tony’s Chocolonely urged.