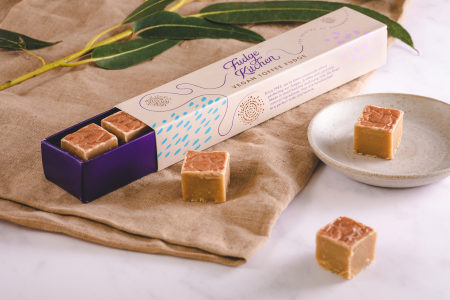 Fudge Kitchen have extended their vegan range to include a Vegan Toffee Fudge for 2022. The new formulation contains their own secret recipe vegan spread.

British artisan Fudge makers, Fudge Kitchen, have added a new Vegan Toffee Fudge recipe to their vegan range. The new product is certified by the vegan society, and made using an oat milk base and their own vegan spread. Vegan white chocolate is then swirled through each batch to add a sweet and creamy flavour. A box of 6 Vegan Toffee Fudge pieces can be bought for £6.50 online and from select speciality retailers.

The launch of this new product comes in response to the increasing demand for plant-based options within confectionery and gifting. The fudge brand, who make all their products in small batches at their HQ in Kent, have seen a 6% rise in vegan sales over the last year with 15% of all their online sales now being attributed to vegan products.

Managing Director, Sian Holt, says “We’ve worked really hard in the last few years to develop our vegan offering. We use a variety of plant-based milks, vegan chocolate and nut butters, some of which are made in-house. Our vegan fudge was originally created in response to customer demand, but is even more pertinent following COP26 and the drive for food companies like ours to offer more environmentally friendly options.”

The brand is known for their theatrical fudge making experiences offered in all 6 of their high street shops up and down the country. Before buying a slice of vegan slab fudge you can see it being made by trained fudge makers on a marble top table. The process takes around 45 minutes in total and is a real spectacle to watch. Once the ingredients have been heated to a precise 237 degrees in a traditional copper pot, they are poured onto a marble top table and folded with a paddle to create a fudge ‘loaf’ that is then sliced up and served.

Marketing Manager, Richard Parson, says “Our vegan gifting range opens up a new gifting category for those seeking plant-based products. Feedback from our customers is that good vegan confectionery is hard to come by, and they are always pleasantly surprised after trying our vegan products, and can’t quite believe they really are dairy free.”

Naturally dairy free, this sweet caramel brittle is mixed with roasted pumpkin and sunflower seeds for a savoury crunch and a natural pop of protein.

Drinking Fudge is pure indulgence in a mug – or glass: it’s equally good in a cold mix, made into a frappe or even in a fruit smoothie. Each box contains 6 flavours: moreish mint, tangy orange, chocolate caramel, original salted caramel, ginger spice & classic chocolate.