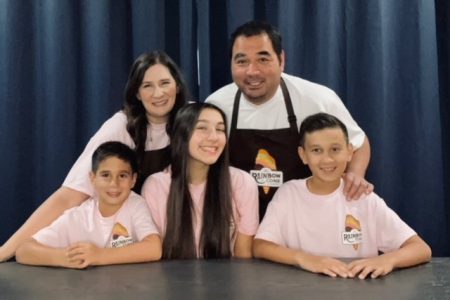 The Original Rainbow Cone has announced its first out-of-state location, which will be based in Sarasota Florida. The company has a long history, after first opening in 1926, it now serves a variety of different ice cream include the five flavour Rainbow Cone, sundaes and milkshakes.

The new location will be done through the company’s franchise programme, with Dave and Erica Campbell, third generation Rainbow Cone customers with connections to the brand dating back to its original Western Avenue building. The Sarasota shop is expected to open in late spring, 2023.

“As a child, my family would bike to Rainbow Cone’s beautiful pink building on Western Avenue and watch in awe as the staff quickly stacked the five flavors of ice cream on the cone,” explained Erica Campbell. “Our family is honored to be awarded the first Rainbow Cone out-of-state franchise location. It’s time to bring Rainbow Cone to the Sunshine State!”

The Campbell family have over twenty years of combined experience in hospitality, sales, marketing and finance.

“We’ve partnered with a great Chicago family to open the first Rainbow Cone in Sarasota,” said Joe Buonavolanto III, VP of Franchise and Sales at The Buona Companies. “We stand behind Erica and Dave as they start their new business and bring classic Chicago flavors to the region, and support them as they serve as leaders in the Sarasota community.”

As the creation of ‘Grandpa Joe’ Sapp, Rainbow Cone has five flavours on a single cone. It has expanded to kiosks and trucks throughout Chicago, and launched its new franchise program in 2022. The program includes a range of opportunities, along with a proprietary business approach developed by the company incorporating support, training and quality assurance, as well as allocating marketing resources and field teams to help franchisees succeed.

Rainbow Cone plans to host a Rainbow Cone truck tour in Florida and giveaways to let the region know about the new location. The franchise program will open additional locations across Florida including Tampa, Fort Myers, Keys and Naples.