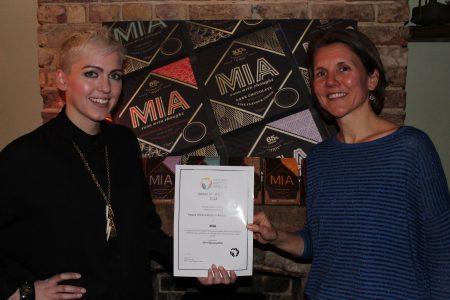 To celebrate officially receiving the Proudly Made In Africa award of excellence in African industry, the MIA chocolate brand collaborated with top chef Killian Lynch at W.B Yeats Bar & Kitchen for ‘Fairtrade Fortnight’.

Beginning on the 26th February and running until the 11th March, the innovative local eatery in the heart of the Finsbury Park community offered a specially created MIA-themed cocktail and dessert.

Each seating during the two weeks also received a complimentary bar of MIA and a percentage of the cocktail and dessert sales were donated to the MIA brand’s ‘1 for Change’ programme, which invests in projects in Africa to help save local endangered species or to improve a community’s livelihoods.

Proudly Made in Africa is an NGO specialising in trade facilitation and the promotion of Africa’s finest food and fashion producers in Europe. Their mission is to support employment creation across Africa by increasing trade in responsibly-produced finished goods and enabling communities to trade their way out of poverty. They also aim to bring positive change in consumer perceptions of Africa so that Europe relates to Africa through trade not aid.

“Our vision is an international marketplace in which high quality, value-added goods from Africa are traded on a fair and equal basis, and where the benefits of trade are harnessed to combat poverty and build a positive future. The MIA chocolate production reflects our standards so we’re delighted to announce the young company as our latest award recipient and carrier of the logo.”

“It’s a huge honour to receive the Proudly Made in Africa award of excellence and something we will wear with pride. With the continent’s natural resources, farmers, producers and talented entrepreneurs, we’re confident we can put Africa on the map when it comes to producing the finest, awe-inspiring food products and hopefully we can do a lot of good in the process.”