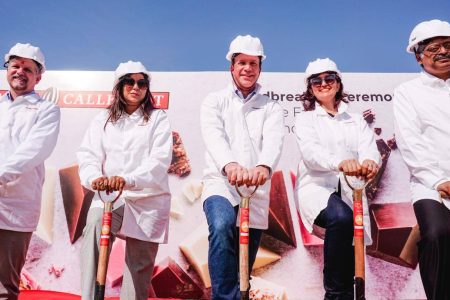 Barry Callebaut has announced the groundbreaking of its third manufacturing facility in India, a chocolate and compound factory which will be located in the Ghiloth industrial area in the city of Neemrana.

According to the company, upon completion of the chocolate factory, India will become Barry Callebaut’s largest chocolate producing market in the Asia Pacific region. On top of this announcement, its total investment in India over the last five years is projected to exceed UK£43 million.

The investment reaffirms the company’s commitment to the country in the last 15 years. Since the opening of the first Chocolate Academy Center in Mumbai in 2007, Barry Callebaut has continuously invested in the Indian chocolate and cocoa market and today operates two factories in Baramati producing chocolate and compound chocolate.

The new facility in Neemrana will cover a total of 20,000 metres squared and is due to be operational in 2024. It will include assembly lines capable of manufacturing chocolate and compound in different delivery formats to cater to the various needs of its customers including food manufacturers, local confectioners and semi-industrial bakers and patisseries. The facility will also house a warehouse and a R&D laboratory.

Expanding Barry Callebaut’s footprint in India is linked with the country’s rapidly developing demand for chocolate and will serve growing demands of its customers.

According to data by Nielsen, India is one of the fastest growing markets for the chocolate industry, as sales of chocolate confectionery grew by 26% in 2021 at a CAGR of 10% between 2017 and 2021.

The company currently has more than 160 employees working in the country and established a network of  nationwide distribution and channel partners over the years. It also imports to India its global chocolate brands including Callebaut, Cacao Barry and Mona Lisa.

In recent months it has unveiled chocolate products to its customers in India including its first dairy-free, plant-based chocolate and WholeFruit chocolate made from cacao fruit.