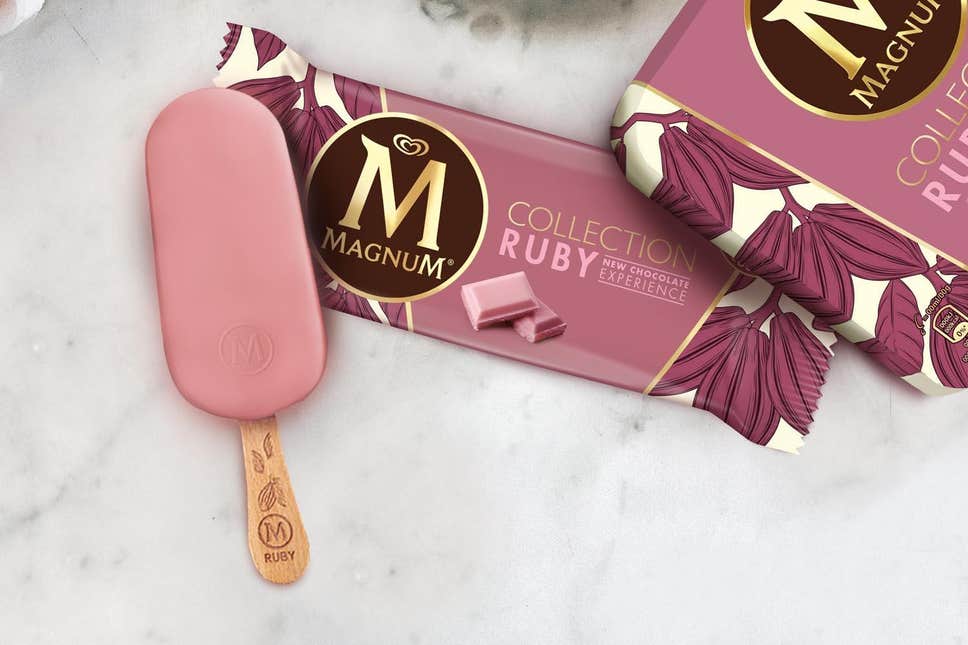 Described as the fourth type of chocolate after dark, milk and white, ruby chocolate was crafted by Swiss cocoa and chocolate products supplier Barry Callebaut. The new chocolate was unveiled in China on September 5, 2017 and is named after its red hue. Ruby itself contains a special Ruby Cocoa bean and tastes like berries despite no colour or extra berry extracts being added to the mix. Ruby is only the fourth form of chocolate ever created, joining the existing types of milk, white and dark chocolate.

On its new product launch, Andre Burger, VP ice ream and snacking, Unilever UK&I, said: “Magnum Ruby opens up a whole new world of indulgence when it comes to ice cream. We’re the first brand in the world to pair Ruby chocolate with ice cream, offering UK&I pleasure seekers the chance to try an exclusive taste experience like never before.

“The indulgent velvety white chocolate ice cream is enriched with a luscious raspberry sauce swirl and coated in Magnum’s signature cracking Ruby couverture chocolate. Ruby chocolate is not bitter, milky or sweet but introduces the nation to a unique berry-like chocolate taste experience.”

The Magnum Ruby is available in stores nationally now with an RRP of GBP3.69 (US$4.83) for a three stick multipack, GBP3.89 for a six mini stick multipack and GBP2.00 for a single stick.