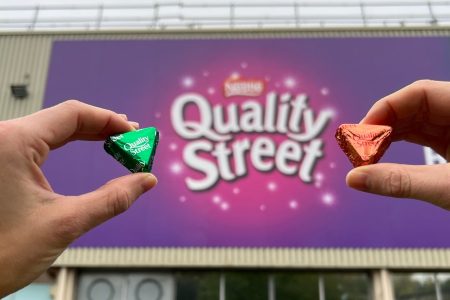 In what it is calling a “limited run”, Quality Street products including tubs, pouches and cartons will include the hazelnut green triangle wrapped in a gold colour while the octagonal orange crunch will be wrapped in a dark bronze foil.

The company has said the chocolates remain unchanged and identical to those wrapped in orange and green colours.

The packs were produced at Nestlé’s Halifax factory when it became apparent that stocks of green and orange foil would not cover a planned production run which took place last week. Quality Street sweets can be substituted for one another when a sweet can’t be manufactured for some reason, but the decision to change the coloured foil was to ensure as many people as possible enjoy the full Quality Street selection this coming Christmas.

“I promise this isn’t a publicity stunt. We’ve not added full size chocolate bars to the tin or removed the coconut flavour from a handful of tubs,” explained Jemma Handley, Senior Brand Manager at Quality Street. “We simply didn’t have enough of the right coloured foil to cover the production run of the two sweets in question and, rather than leave them out of the selection altogether, we decided to use different colours for a very limited period.”

Production at the Halifax factory has returned to normal, Nestlé say, as green triangle and orange crunch are now being produced with their traditional colour of foils while packs with the substitute foil wrappers will appear on shelves at retailers across UK and Ireland over the coming weeks.

“We are fairly sure this is the first time this has happened so anybody who finds a green triangle or an orange crunch in a different coloured foil will have something of rarity on their hands. I am pleased to say that it’s the same delicious hazelnut and orange sweets inside the wrappers, regardless of their colour,” Jemma added.

There will be no difference to the outside of Quality Street products because there has been no change to the sweets themselves. On-pack ingredient, allergen and nutritional information remains accurate and unchanged.

This news follows on from Nestlé’s announcement that cellulose wrappers which have been used on other sweets in the Quality Street selection are being replaced with a new paper wrap, a decision which will remove two billion pieces of packaging from the company’s supply chain, Nestlé report.

Before this week’s temporary colour switch, the green triangle and orange crunch had been the only sweets without a change of wrapper as they were covered in a foil-only wrap without an additional layer of cellulose.