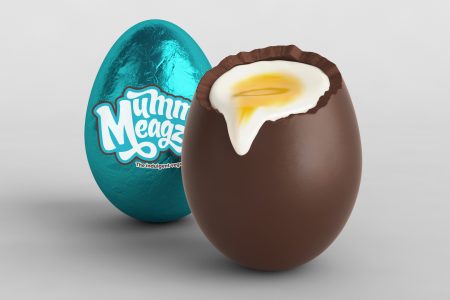 Cult vegan chocolate brand, Mummy Meagz has crafted an indulgent delight – a vegan chocolate crème egg – to inspire those following a plant-based diet for January, and of course in time for Easter. The Chuckie Egg is the creamy chocolate treat that vegans have been waiting for, and will launch into Holland & Barrett stores nationwide from Wednesday 22 January.

Crack open the Chuckie Egg’s rich chocolate shell to reveal a sweet creamy inside, with a gooey ‘yolk’ at its heart. With one bite, the Chuckie Egg shows that being vegan does not mean missing out on favourite treats. Each egg is handmade, and then wrapped in striking blue foil.

With more than half a million vegans in the UK, Mummy Meagz has made it simple for consumers to follow a plant-based diet beyond Veganuary and into Easter. The Chuckie Egg offers a luxurious alternative that steps up from the usual free-from fare into something truly exciting. It will hatch Easter memories and give vegans and non-vegans alike a treat to rival the taste of any dairy-based crème egg.

As the number of people excluding animal products from their diet has grown in the UK, so have sales of the Chuckie Egg. Just six years ago, Mummy Meagz – also known as Meagan Boyle – was making small batches of eggs to sell in her vegan coffee shop in Cottingham, East Yorkshire. The eggs’ reputation grew, and Meagan began to sell them online. Supply struggled to keep up with demand, and after brooding upon the problem, Meagan realised she needed to partner with a major retailer such as Holland & Barrett to fulfil her mission of making delicious treats that can truly be enjoyed by everyone.

Boyle commented: “In a world full of inequalities, I believe that nobody’s sweet tooth should have to suffer due to dietary and lifestyle choices, or food allergies. That’s why I made the Chuckie Egg. Its gooey centre will delight lovers of crème eggs, including those who choose vegan products for the environment and animals, and those who avoid dairy for health. The eggs have grown a huge following simply from being sold in my shop, and I know they’ll become the next big vegan craze for Easter!”

The Chuckie Egg is completely vegan and contains no genetically modified ingredients (GMOs) or palm oil. Each has a recommended retail price of 99p.

Available from Holland & Barrett stores nationwide and online at www.hollandandbarrett.com from 22 January 2020, as well as at independent retailers.