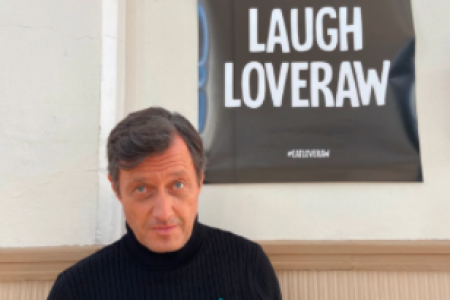 LoveRaw the plant-based chocolate brand, is asking the UK to give ‘Two Fingers to Big Chocolate’ with its latest bold and tongue-in-cheek campaign, encouraging consumers to switch their traditional chocolate to LoveRaw’s innovative vegan range.

The campaign sees the return of classic chocolate heroes from the 80s and 90s in a Mockumentary style video including the Kid, The Man and The Gorilla in an attempt to ‘lift the lid’ on traditional chocolate. The short film, ‘Where Are They Now’, positions the characters as down and out, left out in the cold by the big chocolate brands, until LoveRaw comes along and brings their spark back, giving them a new lease of life.

LoveRaw has created Instagram and LinkedIn profiles for each character, so that consumers will be able to follow each of the characters stories to find out ‘Where Are They Now’. The Kid (@whiteandmilky36) and The Man (@ladiezman1984) have landed jobs at LoveRaw and The Gorilla (@shebangsthedrums07) is now the happy owner of a drum school, Gorilla Groove. Consumers will be encouraged to participate in social media conversations and competitions for the campaign, using the hashtags #TwoFingers to Big Choc and #EatLoveRaw to show the world that they “give two fingers to big choc”.

The integrated campaign aims to drive awareness and position the Manchester based brand as the plant-based chocolate brand for all chocolate lovers. The mockumentary will be showcased in a billboard campaign, across social media, digital advertising, public relations and influencer marketing.

Manav Thapar, Co-Founder at LoveRaw comments: “At LoveRaw we make delicious chocolate, that just so happens to be vegan. We’ve launched the give ‘Two Fingers to Big Choc’ campaign to drive awareness of and get consumers to switch up their traditional chocolate for LoveRaw in a bold and disruptive way, which really brings to life our brand and the way we like to do things. We’re convinced that once they’ve had a taste, people will make the switch from traditional chocolate to LoveRaw, whether they’re extremely vegan, sometimes vegan, ‘unvegan’ or just vegan curious.

“This campaign is the biggest we’ve done to date, with billboard advertising, PR, social media, digital advertising and influencer marketing. We’re sure it will help to drive awareness and consideration of the brand and support the release of our new M:lk Choc Bars.”

The ‘Where Are They Now’ Mockumentary video is now available to watch on the LoveRaw website here: https://eatloveraw.com/pages/where-are-they-now

The LoveRaw range is designed to smash the taste buds with flavour and is available to buy from the LoveRaw website, as well as in key retailers including Asda, Waitrose, WHSmith, Holland & Barrett, Ocado, Co-op and a number of small independents.