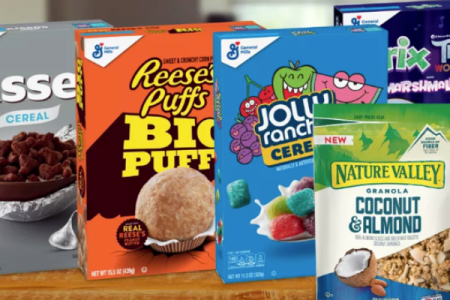 General Mills has partnered with Hershey’s yet again to release a line of candy-inspired cereals. Cereals include Hershey’s Kisses, Jolly Rancher and a new version of even bigger Reese’s Puffs.

The two food brands collaborated previously on the original Reese’s Puffs as well as Cookies and Cream Fillows Cereal and Cocoa Puffs made with their chocolate.

The deal adds to Hershey’s other major partnerships. In July of 2019, The Emoji Company signed a deal with them to bring a limited-edition chocolate bar to shelves during the summer. In November, Hershey’s launched a holiday capsule collection with Forever 21.

General Mills also mixed up some new deals in 2019, partnering with Godiva to create baking mixes in four different flavours.

The new cereals will roll out nationwide throughout the next few months, with Big Puffs and Jolly Rancher cereal debuting in March.

Over more than a century, Hershey’s has said its iconic brands have been built on a foundation of community investment and connections between people around the world. Equally competitive and compassionate, they continue to build a legacy as they invest in the people and snacks of the future. From the beginning, Milton Hershey believed that if you do good, you’ll do well. By doing what they do best—from their delicious snacks to spreading goodness in their communities—they bring people together.

The spirit of creating human connections that motivated their founder 125 years ago remains the driving force that inspires our 18,000 employees today.

And while much has changed in America since the days of Milton Hershey, the power of building connections with those around them—from consumers and shareholders, to their partners and employees—remains vital to the future of our children, our communities, and their business.