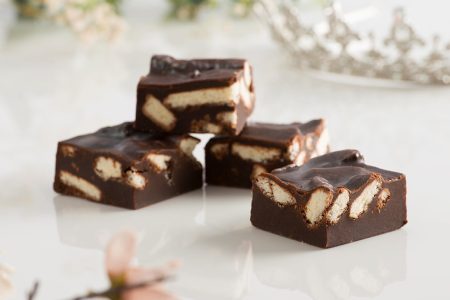 It’s reported, by former Royal chef Darren McGrady, that “this chocolate biscuit cake is Her Royal Majesty the Queen’s favourite afternoon tea cake by far.” Apparently, the Royal seal of approval doesn’t stop there, as Prince William is speculated to be a firm fan too – even having it as the groom’s cake at his wedding to Kate Middleton.

Chocolate Biscuit Cake is made using crushed rich tea biscuits, which are stirred through a decadent rich dark chocolate cake before being topped with a layer of chocolate ganache and left to set in the fridge for 3 hours.

The innovative product development team at Fudge Kitchen have turned this Royal afternoon tea delicacy into a brand-new fudge flavour which will be sold online and, in their shops, up and down the country. It will be made in the traditional slab fudge format and also as a butter fudge bite which will be retailed on their website.

The Platinum Jubilee Chocolate Biscuit Cake flavour is made using a Dark Chocolate & Sea Salt fudge, swirled with crushed biscuit from Kerry’s Gluten Free Bakery based in Deal, Kent. Fudge Kitchen partnered with a UK based baker who could provide them with gluten and palm oil free biscuits, in line with their gluten free policy and sustainability missions. The final touch is a dusting of edible platinum shimmer, giving a firm nod to the Platinum Jubilee with every slice.

Fudge Kitchen’s traditional slab fudge is made in large copper cauldrons before being poured out on an Italian marble slab to cool. Artisan fudge makers then cream the fudge before shaping it into a ‘loaf’, which is then sliced into generous 185g slices.

Customers can watch the fudge being made first hand, in any one of their 6 high street shops around the UK. It really is a spectacle to watch, and impossible to leave without a freshly made slice of fudge in hand.

Fudge Kitchen have high hopes for their Royal flavour, particularly in their Windsor shop which looks out over Windsor Castle. Fudge Kitchen MD, Sian Holt, says “With tourism back up and running after a tumultuous couple of years, we’re already starting to see good foot-fall again. Windsor in particular is expected to see high visitor numbers, with Platinum Jubilee events taking place throughout the year. Our new fudge flavour will be the perfect addition to street parties and Jubilee celebrations”.

Fudge Kitchen are no stranger to a Royal visitor or two. The Countess of Wessex visited their Edinburgh shop on the Royal Mile in June of last year, sampling some of the delicious fudge on offer. To top that, their Windsor shop was frequently visited by Prince Harry and his Etonian pals for some free samples of fudge.

Fudge Kitchen are due to celebrate their 40th year in 2023, and have gone from strength to strength since MD Sian Holt took the helm in 1995. Not only do they produce their unrivalled traditional slab fudge, but they also have an extensive offering of other confectionery including brittles, caramels, honeycomb, butter fudge squares and drinking fudge.

Alongside their high street shops and a flourishing online business, Fudge Kitchen also produce confectionery for some of the UK’s most luxurious hotels and department stores – think Harrods, Selfridges & Fortnum and Mason.

The new limited-edition Chocolate Biscuit Cake fudge can be bought in store and online from Saturday 7th May while stocks last. A slab is priced at £5.50, a box of 4 for £17, a box of 6 for £22 or a 12-slice party box for £40. Fudge Kitchen shops can be found in Canterbury, Bath, Cambridge, York, Windsor and Edinburgh.