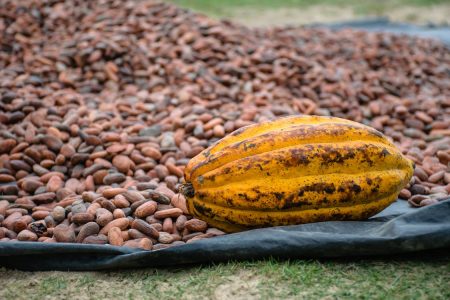 Chocolate production is a process we see has become increasingly automated and smarter, as latest innovations and advancements (best covered in our Chocolate Innovation feature in this issue) have made processes such as tempering, moulding and cooling all the more efficient and controlled. It is the earlier steps, such as fermenting and drying, that play a big role in creating the final flavour profile for the end product of chocolate. Introducing coating to the process helps to create confectionery products such as bon bons, adding more interesting flavours and variety.

Producing chocolate can be broken down into steps: fermenting, drying, roasting, grinding, mixing, conching, tempering, moulding and cooling. Over the course of these steps, a cocoa bean will be transformed into a bar, with the right flavour profile, sensory experience and signature crunch enjoyed by consumers. Flavour looms large in chocolate production, and although flavour can be traced back to farm level as extensive breeding has been carried out to achieve better flavour profiles and resilience to drought and disease; it is the preparation of the cocoa mass and ingredients used in the recipe that play a big part in creating the flavour.

Fermentation is the first step in the process and greatly influences the development of the bean’s natural flavours. Without fermentation, the end product wouldn’t have the flavour we strongly associate with chocolate. During the process, this is split into two parts: the anaerobic phase, where yeast and sugar in the pulp surrounding the bean turns into alcohol and carbon dioxide – this tends to happen over a period of two days – and the aerobic phase, where the beans are regularly turned and aeration allows for the growth of aerobic bacteria which turns alcohol into acetic acid. Once the bud, or germ, inside the cacao bean dies, this is the point at which enzymes are released and the flavour of the chocolate develops.

Some techniques oversee the pulp laid on mats or in buckets, while others lay banana leaves over the cacao bean to protect them, which have the additional benefit of containing natural yeast which assists with the fermentation process. Methods vary depending on the region in which the bean is being fermented as well as accessibility to resources. This will impact on the kind of ‘fermentation vessel’ used, the number of days the cacao is fermented for – a critical decision – and pulp preconditioning.

Producers have been experimenting with the fermentation and roasting processes for decades as the first step towards producing chocolate and an early, critical part of developing its flavour. In their launch of second generation chocolate at the end of last year, Barry Callebaut claimed to have invented a new, novel way of roasting their chocolate leading to the creation of a new flavour; their second generation chocolate. The company explained the importance of fermentation – in particular the length of time and temperature – being critical to the end of result...