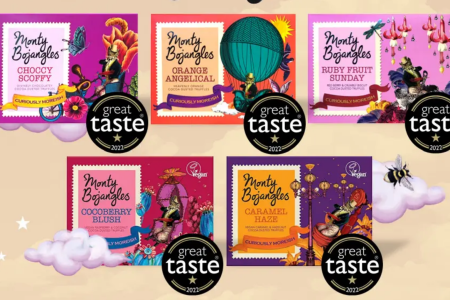 The Great Taste Awards, which are run by the Guild of Fine Food (GFF), is the largest food and drink accreditation scheme. Food and drink entered into the awards is judged by a panel of over 500 experts as a quick way of getting honest and impartial feedback from chefs, buyers, food writers and retailers.

Choccy Scoffy, the company’s signature chocolate truffle flavour, was said to be the judges to have a “delicious rich creaminess.”

“These truffles look hand made as they have inconsistent shapes and a lovely rich cocoa dusting. On tasting, the truffle melts almost immediately and fills the palate with a delicious rich creaminess.”

Orange Angelical, which are cocoa dusted truffles with candied orange pieces, were commended by the judges for their “enticing orange flavour.”

“The quality of the chocolate used is rich, strong but not oversweet and balances perfectly with the orange flavour,” the judges said.

Ruby Fruit Sunday, which are suitable for vegetarians, were noted for their aroma of “red berries and chocolate”, which the judges said is “reflected in the taste with all the ingredients working well together.”

Vegan flavours Cocoberry Blush and Caramel Haze were also highly praised, as the feedback from the judges on Cocoberry Blush was that it had “an interesting initial flavour, bringing in coconut and raspberry. The truffle itself is smooth and silky while the coconut adds dimension in terms of texture.”

Caramel Haze was complimented on its “rich and indulgent look … which had a good shape and size and a sweet aroma. The silky and smooth texture was really pleasing.”

Monty Bojangles continues to expand its offerings, as its Choccy Scoffy, Truffle Selection and Vegan Selection gift boxes can now be found in select Tesco stores around England, and earlier this year, it announced that it can be found in Dobbies Garden Centres across the UK.