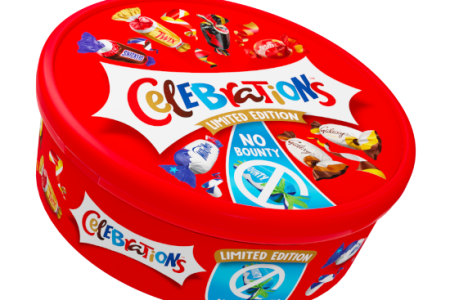 New research has revealed 39% of British people surveyed want Bounty to be removed from the Celebrations tub forever. Ahead of the Christmas period, Mars is trialling new Celebrations tubs which will be sold without Bounty, at select Tesco Christmas Market pop-ups from 8 November – 18 December.

Mars has teamed up with Tesco to trial a new initiative of No Bounty tubs, as from a limited period from 8 November customers in select stores featuring the Christmas Market pop up will be able to exchange tubs bought in-store that day with a new No Bounty Celebrations tub.

These limited-edition tubs will have additional Mars, Snickers, Milkyway, Galaxy and a customer favourite Maltesers to make up for missing Bounty’s. This comes after 18% of Brits revealed they would feel “irritated” if they opened a Celebrations tub to find only Bounty’s were left and 58% said this would lead to a family argument.

The study, which polled 2000 Brits aged 18-65 also revealed that 22% of those surveyed like Bounty the least out of chocolates in the Celebrations tub and 28% believe that coconut doesn’t belong in a chocolate bar at all.

42% of those polled admitted they have argued with friends and family because of it, and 18% would avoid romantic involvement with someone whose tastes differed from their own.

Research also showed that it is the tub favourite chocolate for 18% of respondents and one in five (20%) admit they keep their love of Bounty chocolate to themselves. A more mature palette enjoys Bounty as evidenced by the study, as 38% of over 55s have chosen it as their favourite.

“Christmas is the time for giving – but it seems this year, the British public are keen for us to take away … Bounty. Last year, we gave customers the opportunity to return their unwanted Bounty chocolates. Now, off the back of public demand, we’re trialling taking them out of the tub altogether. You don’t know what you’ve got until it’s gone! And to those loyal (and secret) Bounty lovers out there, there’s still a chance they’ll make a return after the trial,” said Emily Owen, Head of Celebrations Festive Cheer at Mars Wrigley.

The trial will be taking place across 40 Tesco Christmas Market locations as the Market roadshow begins in Manchester on 8 November and will finish in London on 18 December.