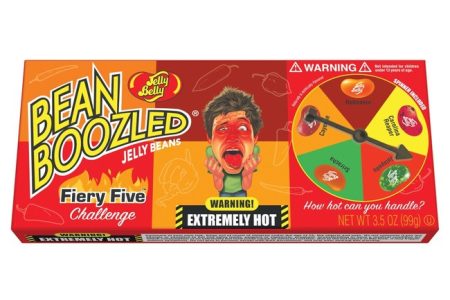 Available on JellyBelly.com and at retailers nationwide, BeanBoozled Fiery Five lets brave fans explore the world of spice with five true-to-life flavours: sriracha, jalapeño, cayenne, habanero and Carolina Reaper. Each bean is appropriately hot for its placement in this progressively spicy lineup, from mild sriracha leaving tasters with a light burn similar to the sauce to Carolina Reaper packing a major punch. Through focus group testing, Jelly Belly noticed that some consumers could handle the heat, but others – well, others could not. Due to this varying sensitivity, the company will place warnings on packages that recommend BeanBoozled Fiery Five only for healthy individuals over the age of 13.

“Fans know that BeanBoozled is a game of risk, but Fiery Five is a whole new take on the game,” said Rob Swaigen, Vice President of Global Marketing for Jelly Belly. “Fiery Five is the next evolution of the BeanBoozled brand as it continues to push the boundaries of flavour and bravery. We want everyone to have a good time with BeanBoozled Fiery Five, but we recognise that some people may need to tap out as they move through the menu.”

For the company known for the accuracy of its flavours, packing Jelly Belly jelly beans with some heat was not enough.

The Jelly Belly way is to wow you with flavours,” said Irena Miles, Director of Research and Development and Quality Assurance for Jelly Belly Candy Company. “So for Fiery Five, we knew it wouldn’t be enough to just knock your socks off with the heat; the candy also has to taste like the actual pepper or sauce. Our goal was to capture the right flavour notes while simultaneously building an appropriate level of heat. ”

“The element of heat added a unique challenge for our flavour team to solve,” added Luz Osbun, Research and Development Manager for Jelly Belly Candy Company. “We had to consider not only how to balance the vegetative notes in the flavour with the heat, but also how that heat presents itself and builds over time. Jalapeño has a sharp build and a quick fade, while Carolina Reaper builds quickly and stays hot for a while after. Our jelly bean versions for Fiery Five had to act like the real thing.”

Fans will find BeanBoozled Fiery Five in a variety of packages. A spinner wheel is available in a special gift box and features a random assortment of 3.5 ounces of the five flavours. Spin the wheel, find the corresponding jelly bean in the tray and see how hot you can handle. Other packages include a 1.6-oz. box and 1.9-oz. bag. In February, the line will expand to also include a 3.36-oz. tin with a large spin wheel on the top.