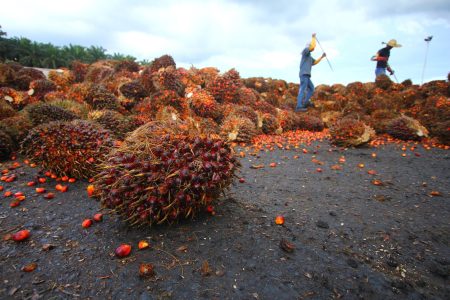 Just weeks after a major undercover field investigation by Rainforest Action Network (RAN) exposed global food brands as sourcing illegally grown palm oil from within Indonesia’s nationally protected Rawa Singkil Wildlife Reserve, RAN is releasing fresh evidence of deforestation in the region connected to many of the same brands, this time through yet another supplier. The new investigation, released today, shows that a company named PT Laot Bangko, a palm oil supplier to brands including major Halloween candy makers Nestle, Mars, Mondelez and Hersheys, has continued to destroy forests in the globally important lowland rainforests of Indonesia’s Leuser Ecosystem until at least as recently as August 2019. This is despite the fact that each of these companies has publicly committed to No Deforestation No Peatland No Exploitation (NDPE) policies to prevent exactly this sort of violation.

“This Halloween, Nestlé, Mars, Mondelez and Hershey’s can not give any guarantees that their Halloween candies are not driving the destruction of the last lowland rainforests of the Leuser Ecosystem,” said Robin Averbeck from Rainforest Action Network. “Some of the world’s last habitat for critically endangered Sumatran orangutans is being cleared to produce Conflict Palm Oil, and these brands are buying it.”

Nestlé, Mars, Mondelez and Hershey’s have each responded to the initial scandal but have failed to immediately suspend sourcing from the rogue palm oil mills the report exposed. Just this past week, tens of thousands of concerned consumers have contacted the companies demanding they publicly cut ties to illegal Conflict Palm Oil and stop all sourcing connected to rainforest destruction in the ecologically rich Leuser Ecosystem.

Campaigners say the response from Nestlé, the world’s largest food maker, stands out from the other chocolate giants, Mars, Mondelez and Hershey’s, as those companies lack explicit commitments to protect the Leuser Ecosystem from deforestation for palm oil and adequate deforestation monitoring systems.

“Nestlé’s commitment to prioritise the Leuser Ecosystem as a priority ecosystem for its forest protection strategy is a welcome move,” said RAN’s Averbeck. “But it is urgent that Nestlé immediately stop sourcing from rogue mills connected to the destruction of Indonesia’s rainforests, and intervene to halt any deforestation identified via its monitoring system.”

This area of wet, lowland rainforest has been dubbed the ‘orangutan capital of the world,’ as it is home to the highest population densities of critically endangered orangutan anywhere. This includes a culturally distinct subpopulation of a few thousand individuals which demonstrate social structures and tool-using behaviours unique from all other orangutan populations. The Singkil-Bengkung region also contains some of the best remaining breeding habitat for critically endangered Sumatran rhinos, elephants and tigers.

The health of the Leuser Ecosystem’s Singkil-Bengkung landscape — comprised of the Rawa Singkil Wildlife Reserve, the Kluet peatland and the connecting lowland rainforests — is internationally significant because of its expanses of ancient, deep, carbon-rich peatlands, which are among the most valuable and effective natural carbon sinks on earth. Conversely, when drained and cleared as documented here, these peat soils transform into carbon bombs that emit catastrophic levels of pollution into the atmosphere for years on end.