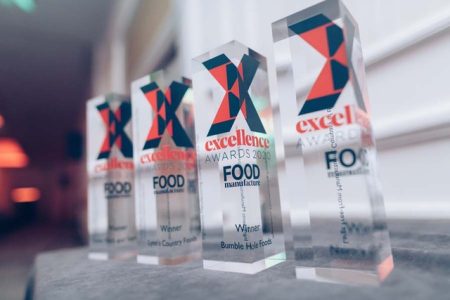 In a glittering, rock themed event on February 13, 2020, hosted by Scissor Sisters singer, Ana Matronic, and complete with casino, photobooth and live band, some of the most influential brands in the food manufacturing industry, including Fudge Kitchen, gathered at The Marriott Hotel on London’s Grosvenor Square, to find out whose trophy cabinet would be swelled by one of the industry’s most prestigious awards.

Having won the same title in 2014, Fudge Kitchen was again honoured to win the Best Ambient Manufacturer of the Year Small Company award, beating a worthy finalist line-up to the trophy in Booths, Burts Snacks, Nim’s Fruit Crisps and LJ Fairburn & Sons.

“What a thrill to win such a prestigious award, particularly for the second time and amongst such stiff competition!” said MD Sian Holt. “The standard and nature of entries this year was a real testament to just how vibrant, trailblazing and exciting a sector the food manufacturing industry is. More so than most, it is a place of incredible creativity, innovation and, increasingly, integrity that we are proud to be a part of.”

“Winning this award tops off a breathless two years for Fudge Kitchen,” she continued, “which has seen a complete redesign across shops, packaging and branding, an expansion of our own labels across Selfridges, Harrods and Harvey Nichols, amongst others, a development of our vegan range, growth in our export interest, to now include a Canadian distributor, and a complete overhaul of our branded range into concise, targeted lines. That has all taken a great deal of hard work, vision and talent from the entire Fudge Kitchen family; and it is to them that I dedicate this fabulous trophy, with my thanks.”