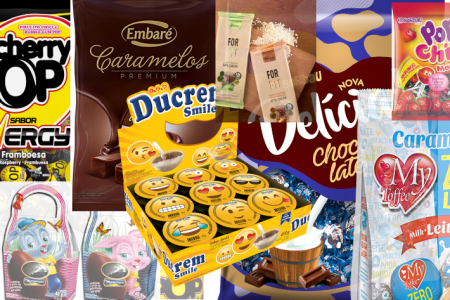 The results of the participation of 17 companies at ISM 2019, confectionery and snacks fair in Cologne, Germany, confirmed the best expectations of the industry. More than US$ 6 million in sales have been closed (US$ 4.5 million in 2018), and the total business generated at the fair is expected to exceed US$ 51 million over the next twelve months. The result represents an increase of more than 150% compared to the US$ 20 million made last year and is a record for Brazilian companies at ISM.

More than 811 contacts were made by Brazilian companies with buyers, of which about 455 were new during the fair, held from January 27 to 30. The companies were assembled in the Brazilian Pavilion, organised by ABICAB (Brazilian Chocolates, Peanuts and Candies Manufacturers Association) and by ABIMAPI (Brazilian Manufacturers Association of Biscuits, Pasta and Industrialised Breads and Cakes), which carry out export promotion projects in partnership with Apex-Brasil (Brazilian Trade and Investment Promotion Agency).

“The good results at ISM are a result of the investments made by the companies and make us leave Cologne very optimistic about the prospects for the industry,” said ABICAB´s president Ubiracy Fonsêca. “Our companies have been trying to meet the international demand for healthier products, and we are now able to offer the Brazilian market and the world products with better quality and sustainability,” he added.

SIMAS, a renowned confectionery maker, leaves Cologne with the satisfaction of having won at least ten new buyers in existing and new markets, such as Russia, Yemen, the Netherlands and Jordan. “The outlook for the next 12 months is a 20% to 30% increase in export sales,” said Luiz Eduardo Simas, Export Director. “The world is more excited about Brazil, despite the fact that international competition is practicing very low prices, because the quality of the Brazilian product surpasses this”, emphasises the entrepreneur.

In its ISM opening, FRANCFORT TRADE peanut exporter celebrates the closing of ten container sales operations during the event, with the expectation of closing US$ 15 million in exports in the next 12 months, based on contacts made at the fair. The company already exports to Germany, the Netherlands, the United Kingdom, Italy, France, Belgium and Spain. “For a first year, it is very good,” said Rodrigo Francfort, Owner.

CORY, which exports candy and confectionery to 44 countries, sold three containers to Albania, Lebanon and Sudan, the latter two being new markets for the company. “In relation to the fair last year, during the event we made about 30% more business. We expect our export turnover to grow around 50%,” said Arthur Fernando Jorge, Export Manager.

The chocolate manufacturer, GAROTO celebrates good results obtained at the fair, where the highlight was its dark line, with a higher percentage of cocoa and the addition of natural fruit flavours such as passion fruit and raspberry, as well as innovations such as salted caramel and cocoa nibs.

“We met with a lot of active clients at the fair, but what surprised us was the demand in markets where we were no longer, old customers have now returned to the fair to reactivate business,” said Ricardo Rocha, Garoto’s Export Manager. Among visitors, buyers from Spain, the United Arab Emirates, Costa Rica, Venezuela and Egypt.

M. DIAS BRANCO, manufacturer of biscuits and pasta since 1936, has launched at the fair the biscuit brand Vitarella, line Delicitá Cristal, which is a sweet cracker. “Our exports grew 28% last year and we expect, with the participation in the fair and other activities, a higher growth in 2019,” said César Reis, Export Director of M Dias Branco company.