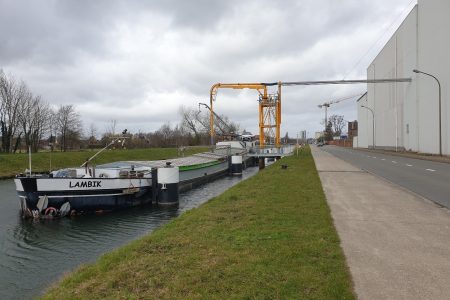 BENEO, a world leader in healthy ingredients, has invested half a million Euro in waterway transport to reduce its reliance on road transport. The project, which has included increasing unloading capacity at the company’s rice starch plant in Wijgmaal, Belgium, will enable BENEO to transport two-thirds of its cargo by barge each year. This will reduce carbon emissions associated with the inbound transport of rice from the harbour to the plant by 20% annually.

BENEO’s Wijgmaal plant has a heritage in waterway transport that stretches back to 1856, when barges were first used to transfer Asian imported rice from the Belgian ports to the factory. In the intervening years, road vehicles took over as the main mode of transport. However, going forward, BENEO has identified barge transport as a more sustainable logistics platform and focus for investment.

Prior to this latest investment, one-third of the rice processed by the Wijgmaal plant was being brought in over water by one barge completing 45 cycles per year. The remaining freight was making the 320km journey from and to the ports by road. The docking station was the bottleneck that precluded higher volumes from being transported by water.

Following BENEO’s investment last year in higher capacity unloading equipment and a joint project with De Vlaamse Waterweg nv to reconstruct the quay, the docking station can now accept two barges, rather than one. The new powerful unloading system can shift more than double the volume of rice per hour than before, considerably shortening cycle time.

“It used to take three days to unload a barge, whereas now it can be done in 16 hours. This has allowed us to charter a second barge. Consequently, two-thirds of the rice used by the facility is now received by barge and just one-third by truck,” explained Roland Vanhoegaerden, Operations Managing Director, Specialty Rice Ingredients, at BENEO.

This uplift in barge transportation has considerable benefits for the environment, as road transport emits on average 115g of CO2 per tonne-km, whereas barge transport generates just 50g of CO2 per tonne-km. By doubling the volumes transported over water, BENEO will halve the number of truck movements to and from Wijgmaal each year. This will result in a 20% annual reduction in CO2 emissions generated by the inbound transportation of rice from the port to the factory, contributing to BENEO’s group-wide sustainability efforts.

“At BENEO, we are always looking to improve our environmental performance. We are deeply committed to caring for people and planet in whatever ways we can, whether through raw material valorisation or driving ongoing reductions in energy and water consumption as well as CO2 emissions. Our inland waterways transportation expansion programme feeds into this and demonstrates how sustainability and efficiency goals can be mutually compatible,” said Vanhoegaerden.

The reduction in road traffic will also benefit the local environment. BENEO’s factory in Wijgmaal is in the middle of an urban area and increasing barge use will lower congestion and noise levels in the neighbourhood.

The upgrading of BENEO’s barge freight capabilities also dovetails with production expansion plans for the Wijgmaal plant. A 50 million Euro investment will increase production capacity by 50% by March 2022, enabling BENEO to match growing rice starch demand driven by the natural and clean label trends. Within three to four years, BENEO expects volumes to have reached a level that will necessitate a third barge to transport raw materials.

“To ensure supply security, we want to maintain a multi-modal logistics model rather than relying solely on a single mode of transportation, but our aim is to increase water transportation in the mix in as far as we can. Barge might be one of the oldest ways of transporting freight inland, but it is one of the most reliable, cost-effective and sustainable,” said Vanhoegaerden.

Image credit: BENEO
To stay up to date on the latest, trends, innovations, people news and company updates within the global confectionery market please register to receive our newsletter here